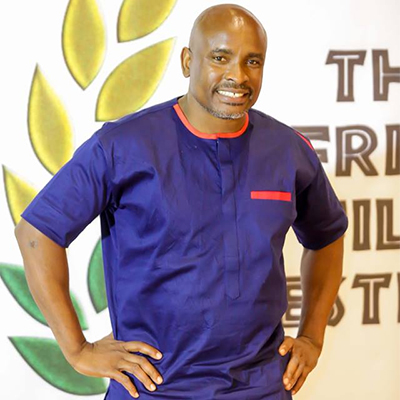 Kelechi Eke is the Founder of The African Film & Arts Festival. He holds a Bachelor of Science degree in Computer Information Systems as well as a Master of Science degree in Information Technology and another Master's degree in Business Administration (MBA). Kelechi serves as the Writer/Director/Producer for BIGOBI, a multimedia company that he formed. He is the creator of biGObi.com, a web portal to showcase his productions.

Despite his astute technical background, Kelechi has always had a penchant for storytelling and creative arts. In the year 2011, he decided to dabble into filmmaking under biGObi Productions. His first movie, Lost in Abroad, is a thought provoking drama about the trials and tribulations of Africans living abroad. Using a combination of humor and traditional African storytelling styles, Kelechi is able to effectively showcase the different perspectives of African parents and children, as well as their American counterparts.

After debuting to a large crowd at the Majestic Theatre in Dallas, Texas, Lost in Abroad became the first African movie to premiere at the historic theatre. The event may have been the first time that over 750 people came together at once to watch a film made by a Nigerian. The movie was later accepted into the library of many Ivy League schools (including Harvard, Yale, and Stanford) as a reference material for African Studies.

Kelechi has used his movie production company to provide opportunities to talents looking for the chance to showcase their skills on the big screen. His second film, False Engagement, was released on Valentine's Day February 14th, 2013 before a sold-out capacity in Dallas, Texas. The movie became the first African film with such feat for a film released on a week night. It later won Best Drama Film at the FACE Awards in Atlanta, Georgia on May 3rd, 2014. Kelechi’s next feature film, African Time, a comedy which addresses the habit of tardiness among many Africans, was premiered on February 22nd, 2014. The movie earned him global headlines on Voice of America. It earned Kelechi an article and a director's page on the most recognized Independent film magazine, IndieWIRE. African Time movie also earned him an invitation to the General Consulate of Nigeria’s 54th Independence Celebration where Kelechi showed it in the presence of the Ambassador and various diplomats.

Kelechi Eke's recent short film, Weeping Ashes, which condemns burning gay people alive in various parts of Africa; won the Best Screenplay at the International Movie Awards in Indonesia on September 24th, 2014. It was accepted into six different film festivals and earned Kelechi the Best Screenwriter award at the 2014 Filmmakers of the Year Festival. His latest film, The Other Tribes, is about tribalism in Africa. It was premiered on February 28th 2015 and earned Kelechi the 2015 African Oscars People's Choice Award for Best Director.

Kelechi is the founder and host of The Black Pot – a cook show that documents how to make various African cuisines. The show won 2015 African Oscars People's Choice Award for Best Online TV series. He is also the founder and Executive Producer of Africa Talk Show in Dallas, Texas. His involvement in the African diaspora community and his dedication to expressing the diverse stories of Africans through writing, directing, and producing; earned him a Lifetime Achievement Award by the Nigerian-American Multicultural Center (NAMC) on May 3rd, 2014 in Houston, Texas. It is noteworthy that Kelechi Eke is the First African filmmaker that Writes, Directs, Produces, Shoots, Edits, and Stars in his own movie. On March 31st 2015, he became the first African Director/Producer/Actor to own his own streaming website, biGObi.TV. On April 20th 2015, he launched The African Film Festival (TAFF) with the vision to increase the availability of African films in non-African communities, universities, colleges and in public libraries as reference materials in the study of African culture, history, people, and issues.